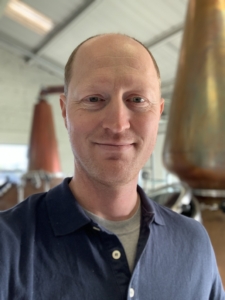 What brought you from California to Mayo?
I came to The Connacht Distillery in part to shake things up in life, stretch and challenge myself and grow my experience, but also and most importantly, to learn from the deep well of knowledge about spirits and whiskey here in Ireland. When you want to learn from the best, you need to go to the best and with the country’s craft spirits movement in full swing, there’s never been a better time to be a distiller in Ireland.

What’s the most important lesson you’ve learned so far?
I think I’ve said it in other contexts as well, but it also applies here. Patience and persistence are key to surviving in this industry. Patience not only because whiskey usually takes a long time from inception to fruition, but also because life doesn’t usually move at the perfect pace as I might imagine it. Sometimes things happen on their own time. Perseverance because distillery work is tough, but the fruits of the work are exciting. If you push through the pain, you usually end up with happy results – and good whiskey!

What do you enjoy most about the industry?
It’s a cliché and everyone says it, but it’s true – the people. Making whiskey for a living is such a unique occupation, but what keeps it interesting and fun is the people one ends up working with. Making whiskey in isolation isn’t very rewarding. It’s meant to be shared and that goes for the process of making it too. I also love watching the growth of the worldwide craft spirits movement and the re-embracing of brown spirits. There are so many ways to approach spirits, both as a consumer and a maker. It’s this variety that helps keep things lively and interesting.

What does your new role entail?
I’m still figuring out what my day-to-day role looks like. Right now, I’m in full training mode with The Connacht Distillery team taking me through my paces to get me up and running on each step of the process from bringing in raw materials, brewing, fermentation, distilling, barrelling and bottling, to inventory controls, facility maintenance and management. It’s a long time since I’ve been the new guy on the floor and while that’s challenging, it’s also the best part when it all starts coming together.

As Head Distiller at Connacht Distillery, what are your ambitions?
I am very excited for the future of The Connacht Distillery. Last year we launched Batch 1, the first whiskey to be distilled in Co Mayo in over 150 years. I was lucky enough to be on site, just a few days after I arrived, when our first cases were loaded on a truck for shipment back to the US market. We have lofty goals and we’re here to make a statement about what Irish spirits can be. Our whiskey will reflect the quality of the combination of Irish water, Irish malt and the unique climate here in Ballina situated on the River Moy, with heavy coastal North Atlantic influences. We’ll also be innovating and hopefully surprising the consumer palate by presenting unique-to-us bottlings and expressions of our Irish single malt. Whether that’s from exploring the different malts we have access to, careful cask selection for our primary maturation of our new make or to sourcing specialty finishing casks, it’s an exciting future for the distillery team.

Is there anything in the industry that needs to change?
Yes of course, no industry has perfected their craft or their culture, but the spirits industry does a pretty good job. I’ve found the spirits and whiskey world to be as welcoming an industry as any I’ve worked in. The only thing that matters to most of us is the product we make. After that, it just comes down to the quality of one’s character. I don’t know if it’s made as many waves here in Ireland as it has back in the States, but the last year or two has seen a reckoning in the alcohol beverage industry when it comes to tolerating, or rather no longer tolerating, discrimination and sexism in the workplace. The likes of @ratmagnet and @emboldenactadvance have shined an uncomfortable and very necessary light on this issue to great effect. One of my goals working in spirits is to continue the work others have begun by keeping spirits an open and supportive community that seeks to lift up our fellow spirit lovers and future leaders.

What’s your favourite drink?
I know this is sometimes a bit frowned upon by my friends in the service industry because it can easily go wrong, but my favourite thing to order is what the bartender is enjoying making right now. What ingredient are they playing with, what style of cocktail are they into right now. Even if it’s not exactly what I’d normally order, it’s what the bartender might have more fun making. At the risk of sounding a little strange, I don’t say that I drink different spirits, I say that I drink different distillers. By that I mean it’s as important for me to know who is making the spirits and learn a little something about them as it is to know a brand or label. Pretentious? Sure. But I’ve had a lot of different spirits (not as many as some to be sure) and so far, I’ve found you can learn a lot about a distiller by drinking their spirits and a lot about a spirit by getting to know the distiller.

What do you miss about California?
You might think it’s the weather which is very nice, but I actually grew up in Northern Indiana where the weather is surprisingly similar to Ireland. Trade a bit of snow for some of the winter rain here in the West and from what I hear, hotter and muggier summers back home mand life looks and feels a lot alike. The thing I miss most is the friends I made over the years in California. Moving there from Indiana I had no idea what to expect, but I was welcomed with open arms seven years ago in SoCal. Fortunately, it’s pretty easy to keep in touch with everyone and they all say they’ll be visiting soon. I’m trying to hold them to that.
Oh and food. Southern California has every type of food imaginable, pretty much at your fingertips. I’m on the lookout for Ireland’s best burrito.