Mescan launch the first of the ‘Seven Virtues’ beers

Mescan launch the first of the ‘Seven Virtues’ beers 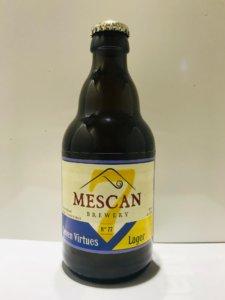 Mescan Brewery have launched the first of the ‘Seven Virtues’ series of one-off brews. It comes hot on heels of their successful Beoir na Nollag Christmas beer and provides quite a contrast in style.

Crisp and slightly dry-hopped, it is a nod in the direction of both tradition and innovation. Seven Virtues Lager has an alcohol content of 4.9% and the recommended serving temperature is between 2o and 4oC.

“Our brew harks right back back to the roots of traditional lagers, quite different to major commercial beers”, explains Cillian O’Moráin of Mescan Brewery, “Seven Virtues Lager has a more balanced and interesting flavour with a light, clean taste. We are very pleased with our first foray into this beer style”.

Named after the monk Mescan who was St. Patrick’s personal brewer, Mescan is brewed on the slopes of the holy mountain Croagh Patrick, near Westport in Co. Mayo. Founders, owners and brewers are ex-veterinary surgeons Bart Adons and Cillian O’Moráin.